Microservices has been gaining popularity in the recent years with more and more software development companies increasingly adopting Microservices to speed up their software application development process as well as improving agility. Moreover, with cloud services, DevOps, and mobile application becoming the focus technologies of the near future, Microservices will play a critical role in enabling software companies to move away from the traditional monolith development, which is expected to become obsolete in the cloud era.

In contrast to the traditional Monolith architecture where the system components are interconnected and built to work together, Microservices architecture is an approach that allows the application to be developed as suite of smaller and independent services running on its own. Each Microservices works individually and focus on its own task representing business capacity.

One important characteristic of Microservices is that these services are loosely coupling instead of being tightly couple like in Monolith. Thus, each development team can build and deploy single services on its own, without having to wait for other teams responsible of other components to finish their parts. This speed up the development process and reduce time-to-market introducing new and better services to end-users.

Moreover, each microservice can be developed by choosing the most suitable language or frameworks for the requirements. This ensures that software development companies employ the new technologies as needed for any new change or update for one specific services, instead of having to build and deploy the entire stack in monolith system which is time and effort consuming. As a result, scalability becomes possible and easier with microservices. In addition, when it comes to maintenance, applications become easier to maintain since each service is a piece of code detached from one another. 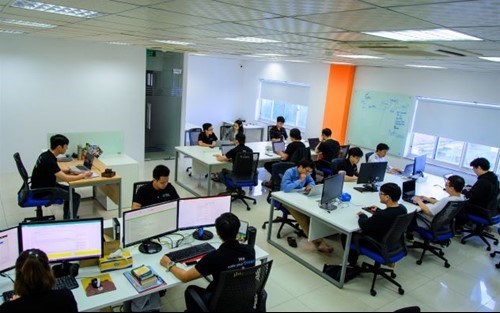 Microservices is an important factor in helping software development companies as well as their developers and DevOps team to improve their process, save time, and delivering services to users faster and with better quality.

Here are the top 5 benefits that software companies can derive from adopting Microservices architecture for their application development:

In microservices architecture, different teams can be working on different components simultaneously instead of having to wait for one team to finish before starting their own. This results in a faster iteration cycles. Moreover, as Microservices break up the entire application into smaller, manageable services that are independent of one another, software developers can choose the programming languages, database, or framework best suitable to the required components. Such method can help reduce the time and effort of developers to write code and maintain the application.

As mentioned before, single microservices can be easier to locate and updates compared to the traditional monolith problem. Subsequently, developers and software testers will find it easier to check for any bugs or errors and get them fixed. This is because in case one single component has issues, it can be tested and resolved without affecting other parts of the applications; similarly, testers and QA specialist team can test the component that is already completed while developers are working on the rest. Clearly, Microservices is more advantageous than the Monolith approach, where the failure of one component can affect the entire system.

Developers can scale a Microservices component independently of others, offering an efficient use of hardware resources and adapt quickly to the changes occur. Systematically, each component can be allocated appropriate infrastructure resources according to its respective workload which is suited to the pay-as-you-go feature of cloud environment. This offers an effective way for on-demand scalability and improves cost-saving for companies as well as enhance customer experience.

Due to its loose coupling characteristic, each microservices can be developed based on its own availability requirement while not affecting other services of the application with such requirements. The separate runtime of microservices application, with each container running on its own, offers a resilience which is independent of failures in other components. With sophisticated monitoring, when running the containers holding the microservices, a failed component in Microservices wouldn’t take down the entire application like in the tradional Monolith method.

For many development companies with teams working in a decentralized models or across different geography, Microservices offer a way for different team to work independently and autonomously. Since Microservices focus on the product instead of project, it enables companies to allocate and divide team in size and capacity to match with the required smaller services which is based around business capacities instead of requiring team to work in the traditional model, separating by technologies. The new model of Cross-functional teams responsible for one particular service provides better collaboration between team, and improving productivities of organization.

Microservices provide many attractive benefits as listed above. However, this is not to say that Microservices approach is perfect without any drawback. There are many factors which software development companies need to take into account when considering whether to choose Microservices approach for their projects, including: suitability and availability of new technologies, team capacity and culture, DevOps practice adoption and maturity level, etc. More importantly, selecting the appropriate software architecture also depends on project scale and requirements. Monolith can definitely be an option for small to medium scale development project while Microservice is more suitable for large scale and complex project.

Can't wait to work with us?

Contact our team today and we’ll get back to you within 24hours to discuss your requirement.